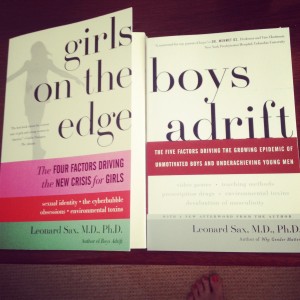 I can’t put these books down.  I’ve finished the one about girls and am flying through the one all about boys.  Now I’ve got to order Dr. Sax’s book “Why Gender Matters,” cause I know I’ll be obsessed.  In these books Dr. Sax discusses the different factors driving the growing epidemic of unmotivated and underachieving boys, and the new crisis for girls.  Separate issues for separate genders!  Now there is soo much I find fascinating in his studies, but the overall differences between men and women have primarily intrigued me.  I’m sure you can only imagine why???…Because the same underlying issues have shown themselves in the lives of adult men and women trying to get married!

Let’s start from the beginning.  Do gender differences derive primarily from genetically programmed differences between girls and boys – or are they learned primarily from social cues?  The Family Proc. clears that debate right up for us.

Gender is an essential characteristic of individual premortal, mortal, and eternal identity and purpose.

So, my opinion is that for the most part we are pre-wired to act like our given genders.  (Dr. Sax reviews some incredible studies that support this point of view!)  OK- so I’m going to skip all the other great stuff he mentions and go right to something I think you and I both can learn from, and about, the opposite sex.  Gender differences in regards to self-esteem.  How are we motivated?

“Some boys need the challenge and the risk of competition to care about the results.”  They need “…A more competitive format to get motivated.”

“…it captures the essence of the research on self-esteem.  For many boys, failure is a spur to work harder.  The competitive format gives these boys a structured enviornment in which they can easily determine whether or not they’re making real progress.  A noncompetitive format in which “everybody’s a winner” is a sure way to disengage this boy from the whole process.”

Women like encouragement. (Again…the generalities…but actually I think this is all of us…but whatever.)

“For girls and for many women, if you believe you’re smart, you’ll actually be smarter – you’ll learn better and do better.. – than if you think you’re dumb”

“Girls aren’t smarter but it is found that they will try harder.  Girls need encouragement.  Otherwise girls are likely to decide they’re not good enough…they give up…”

Girls: “How would you feel if…”

Guaranteed the answers would be more satisfying from a person of the opposite sex if you remembered this little guideline.  Dr. Sax has all sorts of statistics and evidence that supports the mentioned struggles of our rising generation.  It is fascinating how from such a young age these factors are affecting us.  But what’s even more amazing to me is that the root of these factors continue to be the root of our issues today.  At least with the clients I work on matching up!

This entry was posted in Books and tagged article, communication, gender. Bookmark the permalink.